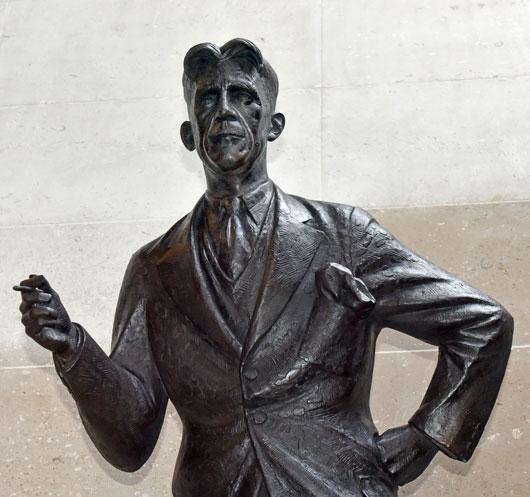 George Orwell (real name Eric Blair) worked at the BBC from 1941-43, as a talks producer in the Eastern Service of what was then the Empire Service (now World Service). Orwell had an ambivalent relationship with the Corporation: while he admired its mission and purpose, he found the bureaucratic atmosphere stifling, once describing life in the BBC as 'something half way between a girls' school and a lunatic asylum'!

However, it is clear that Orwell’s time at the BBC crucially influenced the creation of the two celebrated books, Animal Farm and 1984, which he wrote just after leaving the BBC.

The experience also underlined his commitment to clear and truth-telling journalism, and a quote from his introduction to Animal Farm - If Liberty means anything at all it means the right to tell people what they do not want to hear - is carved on the wall to one side of the statue.